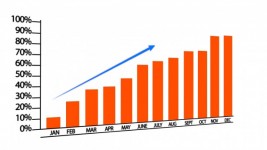 Michigan credit unions are flexing their collective muscle through the 2015 fourth quarter results that report large member and loan increases across the board.

Besides an increase in members, total loans registered double digit increases coming in at $32 billion, up 10.7 percent from the same time last year.

Other key growth metrics include: