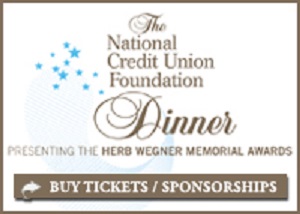 Sponsorships and tickets are available online or by mail with the deadline of Feb. 1, 2016, to purchase. There are a variety of sponsorship and ticket levels for this premier event with different benefits associated with each.

Denise Gabel, Chief Operating Officer of the Northwest Credit Union Association, will be returning as the evening’s emcee.

“Over seven months later, people are still talking about this past Wegner dinner and how much it raised the bar for coming years,” said Gigi Hyland, Executive Director at the National Credit Union Foundation. “We are certainly up to the challenge and expect an amazing experience at the 2016 dinner. The venue is fantastic, Denise is entertaining and engaging, and of course, you’ll leave inspired and rejuvenated after hearing from this year’s outstanding Wegner Award winners.”

The awards ceremony celebrates the highest national honors in the credit union movement. The 2016 honorees are: