Huizenga, McWatters and Others Speak at 2019 CUNA GAC 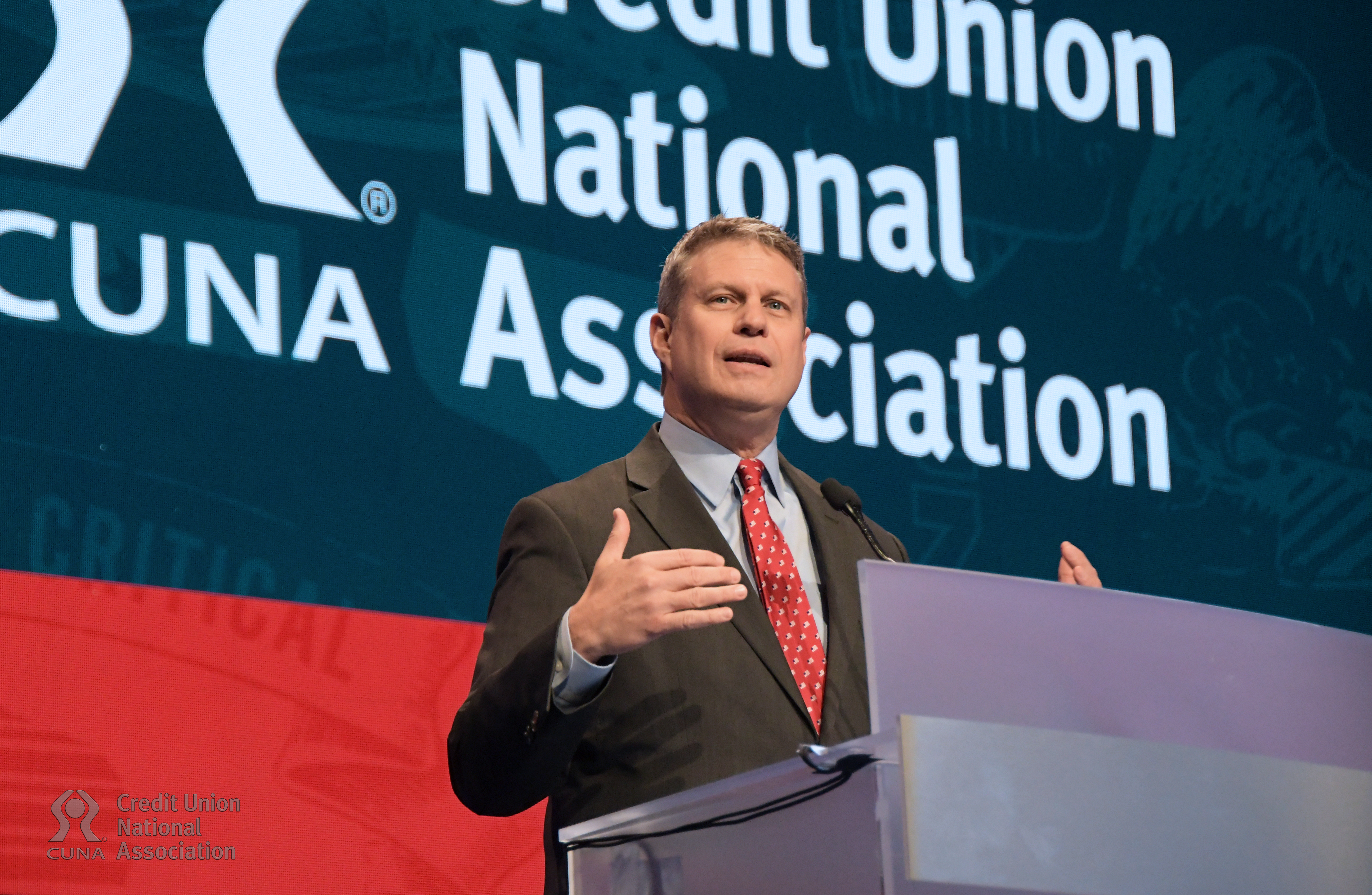 This week, the 2019 Credit Union National Association (CUNA) Governmental Affairs Conference (GAC) has had a host of speakers address the record-breaking crowd of credit union professionals and volunteers. Among them are Michigan Congressman Bill Huizenga, NCUA Chairman J. Mark McWatters and board member Rick Metsger and former Secretary of State John Kerry.

Congressman Bill Huizenga
Huizenga, who serves in the Second District and voted in support of S.2155, the Economic Growth, Regulatory Relief and Consumer Protection Act, spoke on Wednesday about credit union priorities such as housing finance reform, data security and cannabis banking.

“When you are successful, your credit union members are successful,” Huizenga told conference attendees. “Our financial system is under assault and it’s our job to push back on that; to ensure credit unions are given the space to successfully serve their members.”

“This is Congressman Huizenga’s fourth GAC, and we are honored to have him back to empower credit unions to make their unified voice heard,” said CUNA President/CEO Jim Nussle following the speech. “His speech reminded our members about the importance of building relationships with members of Congress. It is a timely message for our credit union advocates who are headed to the Hill today.”

NCUA Chairman J. Mark McWatters and Board Member Metsger
When McWatters and Metsger spoke on Tuesday, they emphasized the importance of communication, collaboration and compromise as elements that help them run the NCUA.

If any legislative change could be made in the future for credit unions, McWatters stated, and Metsger agreed, that the Federal Credit Union Act should be changed to allow credit unions to add underserved areas to their field of membership. “This is something that could move in Congress because it makes a lot of sense,” Metsger added.

Recognizing that this will be his last GAC, Metsger congratulated Nussle and CUNA as being the only national credit union trade association to support the closure of the Temporary Corporate Credit Union Stabilization Fund, which allowed for distributions to credit unions.

“By sticking to your principles, that also means you’re sticking to safety and soundness,” Metsger thanked CUNA for representing its members.

McWatters also noted that CECL implementation and getting credit unions prepared for compliance is a priority for the financial regulator.

McWatters said in closing, “Meeting with you all keeps me thinking and in tune. How can you regulate someone unless you understand what they’re actually doing; so keep up the good work.”

“The NCUA is fundamental to ensuring credit unions are operating in a safe and sound environment,” Nussle said afterward. “We thank Chairman McWatters and Board Member Metsger for strengthening the credit union system by recognizing that regulation must be tailored to fit the unique structure of credit unions.”

Former Secretary of State John Kerry
Kerry, who served in the Senate from 1985 to 2013 and was the Democratic nominee for president in 2004, also took the stage earlier this week.

“The philosophy of the credit union movement is as fundamental today as it was 110 years ago … ‘Not for profit, not for charity, but for service,’” he said. “It’s based on the bedrock belief that everyone ought to be able to achieve a better standard of living by pooling their saving and making loans to co-workers, to neighbors, to people who don’t have access to credit…I thank you for making those words more than just a slogan.”

Kerry then mentioned his long history with credit unions, being a member for the past four decades and supporting the Credit Union Membership Access Act in 1998.

“One of the things that sets credit unions apart is the accessibility of the diversity. You walk into a branch and you see the whole neighborhood. Teachers, policemen, nurses, city workers. Every walk of life working together to invest in the community and improve the quality of life for every single person,” he said. “I think it gives meaning to the notion that when you join a credit union, you’re not just an account number. You’re a friend.”