CASE Credit Union in Lansing and Adventure Credit Union have been named two of the Best Credit Unions to Work For in 2016. Credit Union Journal has partnered with Best Companies Group to identify companies that have excelled in creating quality workplaces for employees. 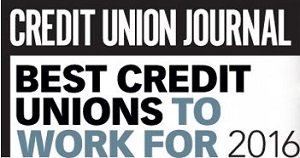 “CASE Credit Union is honored to be recognized as one of the recipients of this award,” stated Jeffrey Benson, President/CEO. “It’s rewarding to know our employees were the drivers of this distinction. It’s through them that we are able to achieve success.”

To be considered for participation, credit unions had to fulfill the following eligibility requirements:

Determining the Best Credit Unions to Work For involved a two-step process. The first step consisted of evaluating each participating credit union’s workplace policies, practices, and demographics. This part of the process was worth approximately 25% of the total evaluation. The second part consisted of employee surveys aimed at assessing the experiences and attitudes of individual employees with respect to their workplace. This process was worth approximately 75% of the total evaluation. The combined scores determined the best credit unions and the final ranking. Best Companies Group managed the overall registration and survey process and also analyzed the data and used their expertise to determine the final ranking.