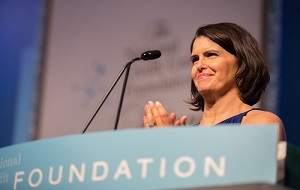 Credit union supporters are encouraged to nominate individuals and organizations for the Herb Wegner Memorial Awards to be presented by the National Credit Union Foundation (the Foundation). Winners will be honored at the Foundation’s annual awards dinner on February 27, 2017 in conjunction with the Credit Union National Association (CUNA) Governmental Affairs Conference (GAC) in Washington, D.C.

“If you look at the list of past Wegner Awardees, you’ll see they are all truly a model of tireless dedication to the credit union philosophy of ‘people helping people,’” said Danielle Brown, Foundation director of donor relations and development. “The Foundation’s Wegner Awards are widely considered the highest national honors in the credit union movement and we encourage you to nominate those individuals and programs that exemplify putting ‘belief into action.’”

Nominations need to be made by Friday, July 29 for the following awards:

Nominations can come from individuals and/or organizations. The following are the three steps needed to make a nomination:

Questions about the Wegner Awards can be directed to Danielle Brown via email or at 608.556.2406.