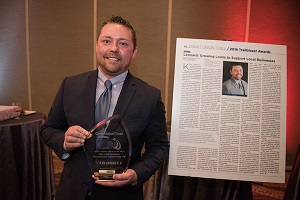 Kenny Leonard is a 33-year-old executive leader who is a trailblazer in every sense of the word. Since joining ECCU in March 2014 as vice president of commercial loan services, Leonard’s vision has resulted in the credit union’s business lending portfolio experiencing an 84% increase in growth (from $3.4 million to $22 million) with zero delinquencies, and achieving the ranks of being among the top four credit union SBA lenders in Michigan with nearly $1.3 million in SBA loans.

So it’s no surprise that Leonard was nominated for – and won – Credit Union Times 2016 Trailblazer Award for Lending Officer of the Year. For the past 11 years, the CU Times Trailblazer Awards have recognized the top credit union professionals in the country in the areas of lending, marketing, volunteering, and more. “It’s exciting to be part of the Credit Union Times award,” said Leonard, “and as a millennial, to see the investment and recognition that they have for future leadership in the industry.”

Leonard is using his extensive background in SBA lending and the collective strengths of his team to carve a niche in the local commercial lending scene, lending to entrepreneurs and start-ups ranging from a bed and breakfast, trucking company, daycare center, chiropractor, breweries and the area’s first distillery. Looking at more than credit scores and financial ratios, the team develops and nurtures each business relationship. “All too often, big bank lenders won’t look beyond the numbers and give business owners a chance,” explains Leonard. “We value the personal relationships formed and factor that into our overall decision making.”

With 2016 already off to a strong start, Kenny and his team look forward to growing their commercial loan portfolio this year as well as eventually adding new product and service offerings.