FLINT – As a part of CU Direct’s “20 for 20” campaign, members and staff of Dort FCU and ELGA CU rallied to get votes for Hurley Children’s Hospital via online marketing and social media posts. Hurley was named a co-winner of the competition in December.

Hurley was named a co-winner of the national contest, which resulted in a $20,000 donation from CU Direct. As an added bonus, Grand Blanc pediatric dentist Alan Klein's charitable organization, the Sheppy Dog Fund, contributed an additional $20,000, bringing the total donation to Hurley to $40,000.

"People helping people, community involvement and active participation form the foundation of all credit unions in general and ELGA Credit Union specifically,” said Cheryl Sclater, ELGA business and community development manager. “These principles were never more evident than during the CU Direct 20 for 20 campaign. This generous gift will touch innumerable lives, and we were proud to be part of it."

“As evidenced by their amazing donation of $60,000 to six CMN Hospitals’, CU Direct is not only a true partner in business but also a true partner in our local community,” Hawkins said. “Their innovative “20 for 20” campaign recognized 20 years of success by creatively and significantly giving back to the communities our credit unions serve. We are grateful to CU Direct for donating $20K to Hurley Children’s Hospital, and we’re happy we could support the hospital by getting the vote out.”

In addition, ELGA announced a $10,000 donation to Hurley to kick off its 2015 campaign supporting Children's Miracle Network. White Horse Tavern in Flint kicked in another $1,000. 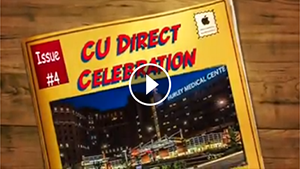 “We are not only grateful for this donation, but for the sense of pride CU Direct instilled in us,” Tracy-Stephens said. “This victory shows how much our community cares about our patients.”

The story was covered by Mlive-Flint. Check out a photo album from Hurley Medical Center's Facebook page. Watch a video of the showing Hurley's rise to the top.

The campaign was a huge hit for CU Direct. The campaign generated 375,000 votes and 2 million page views.